No, I want to stay in the current eShop

Yes, I would still like to change the eShop

Share via email
Some fields are missing
send eMail

Do you want to develop and realise a customized solution with us?

Greg Pilley, the founder of Stroud Brewery, wanted to create a modern craft brewery instead. One with an automated brewing process, which would improve his business and increase sales figures. It was essential to preserve the best aspects of the traditional brewing process and replicate the quality of the handmade product.

Only with better control, higher output and less stress for the workforce. Bürkert equipped Greg and his team with an automated process that included a basic level of brewery process automation.

A modern brewery uses complex control networks for almost every device and facility. The fundamental function of a control process is to measure and feedback different process parameters continuously. The measurement and monitoring of critical process parameters is the most important prerequisite for controlling and regulating a process. Bürkert implemented an automated process at Stroud Brewery that contains three main functions.

The first is the brewery’s temperature control of the cold and hot liquor tanks that are going into the mash tun. In the mash pan the cold and hot liquor are mixed together with the grain and it is important to ensure the right temperature during this process. By using Bürkert’s temperature probes and control system, the speed of the motors is controlled to achieve that precision. The next function is the run-off from the mash tun. This was previously a very labour-intensive process, which required a lot of effort and time to check the vessel continuously.

Bürkert solved the issue by using a three level sensor in the vessel. The control system monitors and controls the run-off, so it never runs dry or overflows. This solution relieved the employees a significant amount of manual work. The last key process that Bürkert automated was the temperature control of the fermentation vessel. It is important to maintain the correct temperature during the whole fermentation process.

The brewery control system measures the temperature through Bürkert’s temperature probes and then adjusts it accordingly. The fermentation vessel is either cooled with water from the chillers or is heated by a heating pad. The control system also features a remote monitoring system. This way, the Stroud Brewery workforce is able to adjust the parameters via mobile phone. 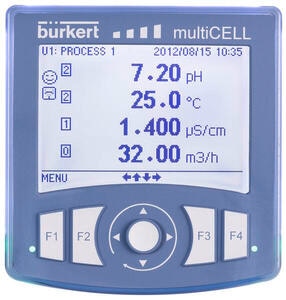 Today, Stroud Brewery offers many different types of beer and is capable of producing four times  as much beer in a single day as before. All that output whilst still maintaining identical taste and quality. Stroud Brewery enjoys a basic level of brewery process automation that provides a good control of the brewing process.

They use food-grade level-sensors, flow meters and an intelligent control panel. This ensures that employees do not have to watch over the process continuously, enabling the brewery’s growth and success.

Bürkert’s solution combines traditional processes with the latest automation systems. This allows traditional techniques to blend with new control technology. By collaborating with Bürkert, craft- and micro- breweries can integrate some of the more basic automation components in the beginning of their process.

As they grow, the process can be seamlessly upgraded and enhanced. Because of the long product life cycle and industry compatibility of Bürkert’s products, many breweries now see Bürkert as an essential one-stop-shop for complete process automation.