No, I want to stay in the current eShop

Yes, I would still like to change the eShop

Share via email
Some fields are missing
Office /1
Search

However, the registration of patents as well as the Bürkert brand for the product range does not deter certain companies, notably those in the Asian region, from deliberately and unashamedly copying products that are already successfully established on the market. Bürkert has been the victim of product piracy more than once. Thanks to the dedicated and painstaking work of Dr. Eppler and her team, various countermeasures have been taken in this area to uncover counterfeiters, for instance, by carrying out several goods seizures at trade fairs. In addition, extensive research has resulted in websites or domains that violate Bürkert copyrights being continuously identified and then shut down.

Against this background, a Chinese company that copied the Bürkert angle seat valve Type 2000 has even been awarded a prize – one that nobody would want to receive. The “Plagiarius” negative prize was awarded for the 43rd time on 8 February 2019 at Frankfurt’s international consumer goods fair “Ambiente”. Dr. Eppler attended the event to represent Bürkert as the original manufacturer of the “award-winning” imitation that won “1st prize” in the 2019 Plagiarius competition. She hopes that negative prize has a deterrent effect that will leave imitators in no doubt of Bürkert’s determination to defend itself against infringements of industrial property rights using all means at its disposal. The primary objective is and remains to protect our customers from imitations that frequently display quality defects.

In this context, SWR television also became aware of Bürkert and talked to CEO Heribert Rohrbeck about the topic during a visit to the campus. The article was broadcast on SWR aktuell on Friday 08.02. at 07:30 pm and is available on the SWR website. The award ceremony was also a topic of discussion in the RTL Hessen Nachrichten, also on 8 February at 6 pm. 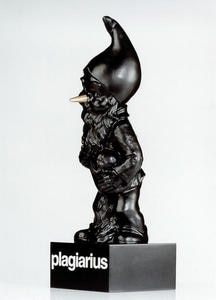 As part of the ‘Aktion Plagiarius’, a copy of the Bürkert angle seat valve Type 2000 was singled out for special recognition as this year’s most brazen imitation. The company from Ningbo in China copied all of the typical Bürkert design elements, thereby infringing the registered copyright. The negative prize aims to raise public awareness of the theft of intellectual property by product and brand pirates.