Take advantage of the My Bürkert customer portal and our eShop:

Share via email
Some fields are missing
send eMail
Search

Initial calculations made by the show's inventor/engineer/presenter Jem Stansfield, who holds a degree in aeronautics, concluded that to move a 75kg person around on the swing would require over a tonne of pressure, a pretty big push then.*

The propulsion system had to be smooth enough not to injure the occupant when it kicked-in whilst delivering a measured continuous push that would send the person on the swing around just once. Too much thrust early on could cause a whiplash injury and too brief a push would prove extremely difficult to judge. 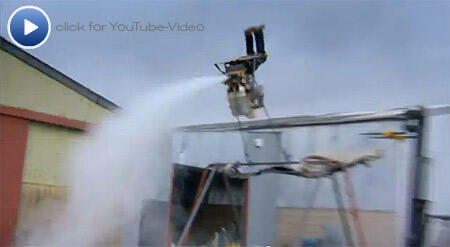 Having decided on a water rocket to provide a short, but controllable burst of thrust, Jem and the team needed a method of releasing the pressure valve on the compression tanks smoothly and reliably. Thankfully, Bürkert's Type 6014 direct acting solenoid valves provided the perfect solution.

The pressure tanks chosen were old American fire service breathing tanks, filled (presumably after some trial and error) with 4.3 litres of water at 250 bar to provide the ideal amount of motive force. The water exited from the jet pack via twin 5.5mm nozzles in order to create an estimated 240hp of thrust.

The Bürkert solenoid valves were used to actuate the main high pressure water valves that had a rotating visual indicator on the outside to confirm when the main pressure valve is actuating. Having tested the swing with straight bars, a catch net and a dummy weight, the presenter then strapped himself in for a brief, but spectacular jet-powered ride on a park swing. (Watch the video attached).

The 6014 is one of the most widely employed of Bürkert's solenoid valves, compact efficient and super reliable, the company sells many thousands of these valves every year for a variety of duties using different seal and body materials to control the flow of liquids and gases from air and water to hydraulic oil and natural gas.

Neil Saunders, Sales Manager at Bürkert UK comments, 'This is an adaptable general purpose industrial valve in an unusual application. The fact that it is one of our most popular products isn't surprising as the application is actually very common, i.e. piloting a larger, or higher pressure valve - just not on a jet pack. I can see why the 6014 solenoid has been chosen, as it's a market leader and the basic design is tried and tested, so reliability, performance and safety can be relied upon.'

* Note. (The show doesn't entertain the possibility of a small child and very big dad, so the urban myth isn't necessarily debunked).